It was one year ago today, in the middle of the night, that my wife and I got that fateful knock on our bedroom door from our downstairs tenant.

“What do you mean we’re being evacuated?” I exclaimed. “For what?”

And for the first time, my wife and I turned off our bedroom fan and opened our bedroom window to listen. I will never accurately be able to describe just what we heard that night, other than to say it sort of sounded like a jet plane was rushing through our backyard.  We rushed downstairs and out onto our deck and in the dim light of early, early dawn, we realized that our tiny little baby of a creek, Cougar Creek, a whopping 2 centimeters deep at the best of times (and without water at all for 360 days of the year), was an engorged torrent almost 40 meters wide raging against the outer edges of our property.

The moment was surreal. One year later, I can still vividly recall everything about that night, from our dazed and confused periods of simply standing there staring at the creek as it raced towards our house eating away at the bank minute-by-minute, to our frenzied gathering of everything we thought we needed to save, shoving our pets and computers and hard drives and family pictures into our vehicles until they were stuffed like sausages.

In the meantime, our sleepy little mountain town slowly began to awaken and the streets came alive with a throng of activity as our neighbours struggled like us to comprehend the situation and to get organized…we really had no idea what we were even organizing (case in point, when we finally were ready to leave our house, a person that I did not know that had just been in our living room helping us grab art off the walls asked if we had our marriage license and passports and documents like that — the thought of grabbing such vital paperwork had never even occurred to us in the flurry of anxious gathering and moving).

Our vehicles were packed by 4:30 a.m., but because our ‘flooding’ situation was so different than what the rest of Alberta experienced (rather than overland flooding, we were watching the banks of our yard cave in against the rushing water), we continued to remove items from our house and transport them to a neighbour’s house across the street until 7 a.m.

Shortly before 8 a.m., while standing on the street in front of our house in the pouring rain, I finally got in touch with my insurance agency and was stunned to discover that neither our house insurance or my business insurance covered any potential damage from the flood (Canada remains the only G8 nation that does not offer flood insurance). Within moments, I had frantically posted a message on twitter and facebook asking anyone and everyone in the area to come and please help me remove the $300,000 in product inventory (my books and greeting cards) that I had stored in our double-car garage.

What happened next still brings tears to my eyes when I think about it.  An entire neighbourhood galvanized behind my messages and within minutes trucks and vans and friends I hadn’t seen in years and people I had never even met before started arriving in front of our house, all intent on transferring 422 boxes of books and 54 boxes of greeting cards to safe havens around our town far from the creek. It was something I will never forget and will forever be grateful for.

By 8:30 a.m., we were officially evacuated.  The creek was now at our property lines, just 9.5 meters from our houses. The banks had already eroded an astonishing 35 meters and the creek was now taking down full-grown trees at the back of our yard.

At 10 a.m. I got permission from an RCMP officer to go back into our backyard to quickly document on video what our yard looked like.

For the next two days, we sat on pins and needles in our neighbour’s house across the street.  The three of us, my wife, myself and our neighbour Wade Graham (thanks Wade!), had decided early on the 20th that we were not going to evacuate our neighbourhood and not go to the evacuation centre: we informed the RCMP that we were not leaving and explained that we felt we were safer to stay out of the lower elevation downtown core where the centre was in favour of the higher ground of our neighbourhood.

We sat drinking and eating, laughing and crying, watching the rain pound down around us, and listening to that damn torrent roaring across the street. We were at times despondent (at 1 p.m. on June 20th, a firefighter came from the back of our house and said, “I’m really sorry, the water is halfway up your basement door”) and at times jubilant (an hour later, the same firefighter told us the water had changed course and wasn’t even against our house anymore).

I remember doing scores of interviews with outlets like CTV and CBC and with Canadian news icons such as Ian Hanomansing and Peter Mansbridge, and I recall not even calling CNN back at the height of the drama so I could console my wife when we thought our house was going to be lost (at one point the creek raged right below our house undercutting our foundation). 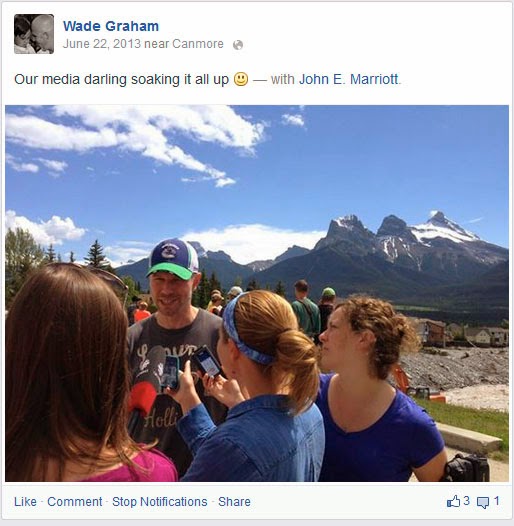 Looking back now, I honestly can’t even remember the final moments, the realization that it was finally over after several days of anguish. I guess the rain slowly dissipated and the creek began to subside, but I can’t really remember much of that time.

In the end, our house stood strong, as did many of our neighbours’ houses. We all lost our backyards and we all suffered varying degrees of damage to our house.  We lived in a hotel for two months while our foundation got repaired, but we know just how lucky we were.  Our house is still standing, and for the first time in my life, I truly now know the phrase, “Home is where the heart is.”

Some of our friends were not so fortunate.  Houses on our creek have been torn down, while others still sit in a state of disrepair a year later. 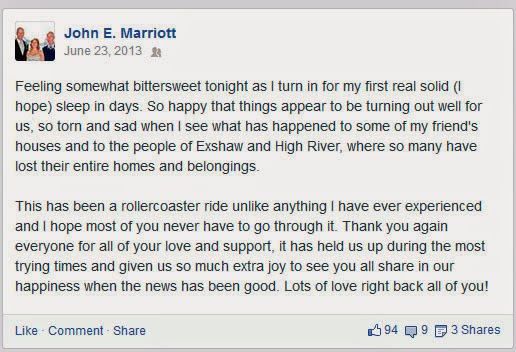 The night of June 20th, 2013 will not soon be forgotten in this household or in this town. But one year later, we have a lot to be thankful for.

As much as the past year has been a nightmare for our personal lives and for my business, it has also allowed us to the see the best that humanity has to offer in times of need.  It began with those selfless people that showed up in our driveway at 8 a.m. last year and continued through the following days as RCMP from across the province helped local firefighters help us get through the crisis at hand. The National Army showed up on our doorstep to chip in, and within a day the Red Cross had mobilized and was setting up aid stations.

While I fought like a demon with the Town of Canmore during the event itself (I actually got told to stop phoning the Emergency Help Line at one point — long story best told over a case of beer), a year later I find myself calling John, Andy, Sally, Lisa, Aleric, Felix, and Greg friends of mine. To say they did a fantastic job of managing the situation over the past year would be to understate the work that these amazing people have done in the aftermath of the flood.

Solara Resort stepped up big-time and offered us a hotel room to stay in for two months with our dog and cat at just $1350/month in the middle of summer when the room would have normally cost $295/night. The Rotary Club of Canmore distributed three aid payments to households like ours that were affected by the flood, all based on the generous donations that people like you gave them over the past year.  And the Province of Alberta paid for our foundation repairs in their entirety.

To me, one of the things I will never forget is how this community stood behind us and helped us when we were down.  The support from our friends, family, and neighbours like Wade, and from people that I barely knew via my Facebook page or my Twitter account was truly heart-warming and honestly kept my wife and I going through thick and thin in the past twelve months. Thank you.

In recent months, I’ve often been asked by media questioning me if there are any silver linings in this for us residents of Cougar Creek.  And perhaps that’s what I’m most thankful for of all, because of course there are silver linings that bring a smile to my face whenever I think of them.

Those f%#@ing trees that were blocking our view are now gone.

That bigger deck we’ve always craved is soon to be a reality.

We now know our neighbours. We always knew Gerald and Debbie and Dan and Christie, but now we also know Peter and Colleen and Gus and Marion and Alaina, along with hundreds more.

And finally, perhaps most importantly of all (tongue sorta firmly implanted in cheek),  the legendary Marriott fire pit, host of many a late-night gathering over the past five years, will once again soon be surrounded by merriness and laughter with family and friends, just the way it should be.

It’s finally one year later, and while we will never forget, we’re so very happy to be moving forward.

So happy to hear your house could be saved, and so heart warmed that community spirit lives! <3

What a life changing experience this has to have been – so glad to read life is returning to 'normal' (whatever that is LOL) may your continuing journey be blessed:)

Great to hear that life is nearing a new normal. Wishing you a much better year ahead!!!!

this is so well written – reflective and well documented. It should be sent to a CDN magazine like Explore or something similar making it available in print to a wider audience.

An experience you wish you never had! Hope all is well now.
Alan and Betty

well said John and so glad there was no loss of life for you and your family, I too had family in Calgary and fortunately they lived only on the fringe of the evacuated area, our one son spent his first week in Calgary volunteering in the clean up – a good thing for him…and we will continue to love your photography…best of luck for the future…Darlene from BC

Glad to hear things are finally back to normal and that your home is safe, I'm glad you have such a wonderful community of people around you, May your continued journeys be safe a filled with lots of fun and adventure, hope to see you again soon, All the best, your an amazing friend.
Steve woods

Glad to hear your world is getting to a new normal. Wishing you a much better year ahead!!