It’s official! The December issue of Canadian Geographic magazine will feature this image of mine of Delinda, a wild wolf that I came to know very well over the course of a few years, on the cover: 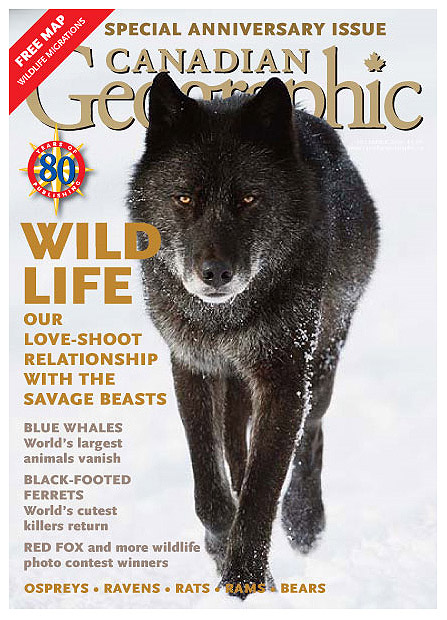 I knew I was in the running for the cover about two weeks ago when the photo editor for the magazine called me and asked for my permission to put two of my images of Delinda in the online ‘cover vote’ that they do with subscribers to confirm their selection of each month’s cover.

My two images (see below) were up against a red fox. 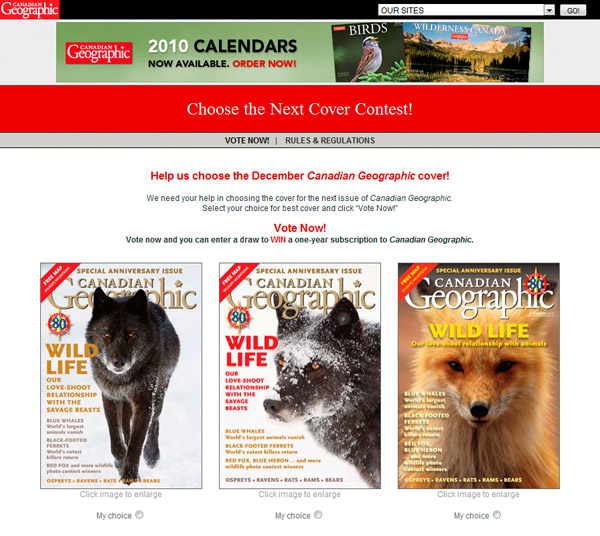 Fortunately for me, the readers chose one of the images of Delinda, though as this week’s Banff Crag & Canyon article on the cover selection suggests, I wasn’t sure I’d win. In fact, I was pretty sure that my two wolf images would saw each other off at the pass in the voting, handing the next cover to the image of the red fox.

Thankfully I was wrong! It’s my first cover of Canadian Geographic magazine, though I’ve had several covers with them for their catalogs and calendars over the years and am quite regularly published in the magazine via my stock photography agents.

The Canadian Geographic website is also doing a feature story on the cover shot and on my experiences with Delinda, the former matriarch of the Bow Valley wolf pack who died tragically on the Trans-Canada Highway a year ago. You can read more about her untimely death in the article below from Macleans magazine in September 2008 (click on the picture to see the full-size article). 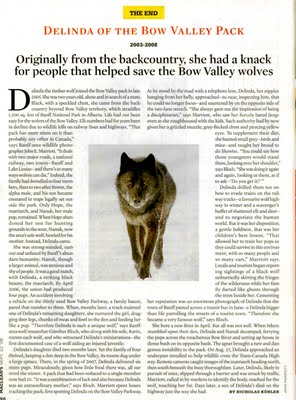 A year later and Delinda’s death is still no easier for me to take. Every time I drive the Bow Valley Parkway I’m reminded of the cherished time I got to spend watching and photographing her and her pack. Her death signaled a changing of the pack structure and the beginning of chaos amid the Bow Valley wolves. Today, 14 months after her death, more than half her pack has been killed just like she was on the busy roads of Banff National Park, Canada’s supposed ‘flagship’ national park. And with no sightings of any members of the pack in the past few months, no one is even sure if any of them are still alive.

Since this coming December issue is the special first anniversary of Canadian Geographic’s annual Wildlife-only issue and one of the topics in the magazine will be the state of wildlife conservation in Canada, I think it’s very fitting that this iconic image of Delinda, one that already greets millions of Banff visitors from the back of one of the town’s hybrid buses, will be gracing the cover of Canada’s most-read nature magazine.

I can only hope her picture and her story lead to an improvement in how wildlife is managed (an oxymoron in itself) in our national parks.

Congratulations John! That's a fantastic image and an even better achievement!

Awesome work John. I look forward to your instruction at the SNAP session. It will be a great time!

Thanks everyone, much appreciated! Matt, look forward to seeing you at SNAP!, too.

Congratulations, John. This is an amazing photo of her. I expect this is the first of many Canadian Geographic Covers!

A touching story and a beautiful photo. My only concern is the "savage beasts" used in the cover wording. Wolves,has you have written and felt,are magnificent animals. We are lucky to have them in our backyards.

Very true, Nikki, though I'm not sure that's the final cover. In fact, it may include some of the wording from last year's Wildlife cover. This was simply their mock-up for the online vote. I'll post the real cover when it comes out.

Congrats John! That was my pick.

Lovely picture….touching story. I'm on the lookout for this magazine.
Tracy Bzowy

A great photo John and a wonderful story of the Bow Valley pack! A sad ending for Delinda but hopefully work can be done to improve on the ever encroaching human activity. My wife and I were fortunate to hear wolves howling on a x-country ski jaunt about 30 miles east of North Bay, Ontario; an experience I will always remember. Keep up the good work!

A winning photo for sure. GREAT work, John! It is no wonder you have such a stellar photo reputation.

I just read the article about Delinda. I had no idea. I love the Parks but am only beginning to scratch the surface of their beauty and wildlife. Thanks for sharing this.