This shot of mine of a red fox pup leaping through the air recently won the grand prize in the Mammals category of the 2008 Canadian Geographic Wildlife Photography of the Year competition. 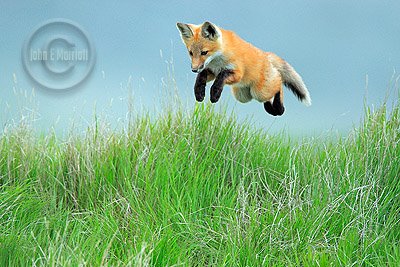 ‘Superman’ of the fox community!

The image along with the story are in this month’s (December 2008) issue of Canadian Geographic magazine.

I got the shot on a deserted country road in southern Saskatchewan this past June. I’d been driving around the area for a few days looking for badger and red fox dens and had been having quite a bit of success. On that particular morning I’d been skunked at the den I’d sat by at dawn, so I was whizzing around checking a few of the other den sites I’d found. As I was driving past a hillside I’d driven by several times already, I suddenly noticed two fox pups playing in the tall grass beside what looked like another den, a new one that I hadn’t noticed before!

I took a few shots of the pups out of my car window, then got out to try to sneak in a little closer. As soon as the pups saw me, WHOOSH!, they were gone down the hole. So I quickly raced forward and set myself up behind a bale of hay at the bottom of the hill, about fifty metres away from the den.

After a few minutes, the pups came back out. Not feeling any danger and not seeing me behind the hay, they started playing again, running all over the hillside chasing each other. As they were racing about, I spotted a pair of rust-coloured ears poking up over the top of the hill.

“No way! There’s another pup!”

It looked poised to pounce down on the pups below, so I quickly focused on the spot that I thought it might jump over, then fired off a series of shots as the pup launched itself through the air like Superman, intent on ambushing its siblings.

“Please, please, please,” I muttered to myself, hoping that at least one of the shots was sharp. A quick check on the back of my digital camera, and I knew instantly that I had a ‘stunner’!

The amazing part was, the pup went back up and did it again…and again…and again! Four times in total, but my first series of shots still produced the best overall photo.

After chatting to Canadian Geographic about the photo, they ended up interviewing me twice more this fall for their Photo Club articles about the ethics of wildlife photography.

The ethics of wildlife photography are very near and dear to me. I do not photograph animals that are raised in captivity or that live in zoos. To me, that’s not ‘wild’life photography, rather, it’s simply model photography. It’s definitely a lot more challenging to get out in the wild to try to photograph elusive animals, but that’s a very large part of what draws me and many of the colleagues I admire to wildlife photography.

I have always tried to be as ethical as possible in my wildlife photography. I only photograph wild animals, I don’t bait animals, I don’t sell my photographs to hunting magazines, and most importantly, I try to avoid disrupting an animal’s behaviour while I’m photographing it. In a perfect encounter for me, an animal is still doing what it was doing when I arrived when I leave. Of course, that’s not always possible, and sometimes I have to make choices in the field.

This red fox pup and its siblings are a great example of that. The pups themselves didn’t give two hoots if I was there photographing them, provided I stayed hidden behind the bale. They knew I was there, but they didn’t pay me any attention as long as I wasn’t visible. However, I limited my time each day at that den because I could tell that it was bugging the adults, one of whom would not come anywhere near the den when I was around. I tried to only visit the den when the adults were off hunting, and if I saw them coming back, I would immediately go back to my car and leave the area.

Please feel free to contact me if you have any questions or comments about the ethics of wildlife photography!

3 Comments on “Canadian Geographic Wildlife Photography of the Year Winner”

It is an incredibly sweet shot – congratulations! I like how the fox is above the horizon line in the ‘blue sky’ – it really conveys how light these little guys are on their feet.

John : Firstly congratulations on your award. You deserve it. After reading your post on ethics on wildlife photography I am pretty sure you deserve it much much more.

and coming to this image, this is truely a stunner and worthy of the award. Congratulations once again…Thomas

Helo Mr. Marriott!
I was having fun of my spare time at the front of my computer when i came to think of searching photographs captured by great nature photographers.

actually, this is my first time to visit your site and i’m pretty amazed to this masterpiece of yours…

your photos hav been one of my inspirations in reaching my dream as a nature photographer like u!

it is really a lovable and charming shot!
Conratulations!