When I decided back in the dead of the 2007-08 winter that I wanted to start focusing more on photographing prairie species, little did I suspect that I would develop an addiction for them much like my addiction for bears…and wolves…and moose…and…yeah, you get the picture (poor pun, I know, but it’s 2:40 in the afternoon and I should really be napping, not blogging).

By far the biggest itch that has yet to be scratched to its full potential has been swift foxes. I’ve been enamoured with the little guys for years, yet had not made a concerted effort to try to find them and photograph them until this year.

In March, I spent a few days researching Canadian swift foxes and quickly learned that they are a) extremely scarce and b) extremely scarce. In other words, I figured out that getting good photos was not going to be easy.

Swift fox were actually extirpated from Canada just after the turn of the 20th century. The last museum specimen was killed in 1928 near Govenlock, a tiny frontier town that now consists of a concrete foundation where the schoolhouse was, along with a few remnant timbers and foundations scattered about alongside the gravel highway connecting southern Alberta with southern Saskatchewan.

In 1983, the Canadian Wildlife Service teamed with the Calgary Zoo and several other organizations and began releasing wild foxes from the US along with captive-bred foxes from the Cochrane Ecological Institute. While the program took a long time to be deemed a success, there is now an established population of wild swift foxes in the south-eastern corner of Alberta and the south-western corner of Saskatchewan.

So off to Govenlock I went…dead center between “the south-eastern corner of Alberta and the south-western corner of Saskatchewan,” I figured it was a good place to start looking. My very first morning down there in early March 2008, I found fresh swift fox tracks in the new skiff of snow criss-crossing the road just kilometres from the Montana border.

And just like that, I was hooked. I still hadn’t even seen a fox yet, but suddenly I was ‘obsessed’!

My first week near Govenlock produced minimal results in terms of photography. I found what may have been two dens, saw one swift fox running through the prairie at a distance, and photographed one fox sunning itself near a den. 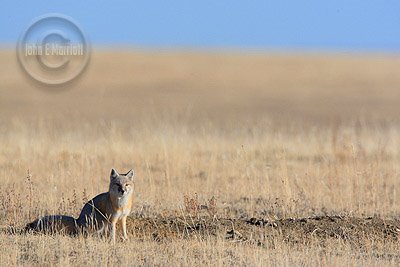 The first swift fox I ever got to photograph!

After that trip, I began to plan trip after trip after trip to the Govenlock area and beyond, trying to find more swift foxes. I spent a total of three weeks in June and July cruising the remote gravel roads of the southern Canadian Prairies and asking for permission to explore on private lands on foot. I had lots of leads and even more people on the lookout for me, including a good friend in Consul, Saskatchewan that would phone me regularly with updates from his travels about the countryside for work.

But in the end, my swift fox experiences came down to sheer luck. And a bit of blind ignorance, too!

The lucky encounter took place in a remote area of Saskatchewan. I was driving along a narrow dirt road through what looked like prime swift fox country. 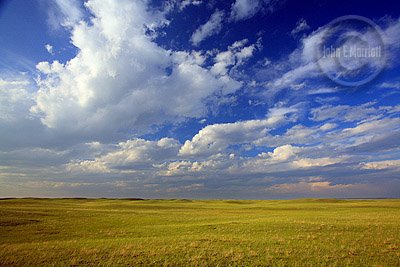 This is what prime swift fox country looks like!

I came over a small rise and spotted movement to my left. Ahhh, a red fox den!! I quickly counted one, two, three, four, FIVE foxes!!

“But wait a second,” I thought. “Why is there a red fox den in the middle of the open prairie? And why do these foxes look kind of ‘different’?”

I couldn’t figure it out…I tried approaching the den, but as soon as I did, the foxes all dove into holes and that was that. With no foxes to look at, I decided they HAD to have been red foxes, because they seemed to be much too large to be swift foxes, which are about the size of a housecat.

I got back in my car and drove off, spending most of the rest of the day looking elsewhere for my elusive swift foxes. But something in the back of my head kept niggling away at me…why were those foxes kind of different looking? Were they actually swift foxes?

Truth be told, even though I had gotten photos of the adult fox sunning itself near Govenlock back in March, I had not really had a good look at it because I’d been so focused on getting a photo before it disappeared.

So there I was, in the middle of nowhere Saskatchewan, waging war in my head over whether or not I’d actually stumbled upon a swift fox den unknowingly. So I did what anyone would have done. I went back, set up a blind, then waited patiently to get some shots that evening of my red/swift foxes. I hustled to the nearest town with internet access the next morning, uploaded a few photos and sent an email to a researcher at the Calgary Zoo.

By the time the email reply came back a day later, I was sure I was photographing swift foxes. And indeed, I had been. My “red fox den” was in fact a very advanced swift fox den where the pups were already almost as big as the adults.

For the next few days I spent some time photographing the den, though I never did set up very close to it as I could tell that the adult dog fox was very wary of my blind and was not acting naturally around it.

After three long weeks of searching, I finally had my swift fox photos. In the end, I found two active dens and saw a total of 13 different foxes! Considering that Canada may have as few as 250 of them in the entire population, I considered myself extremely lucky to have found so many. 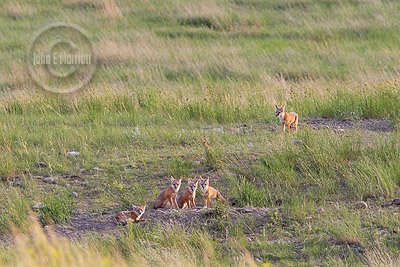 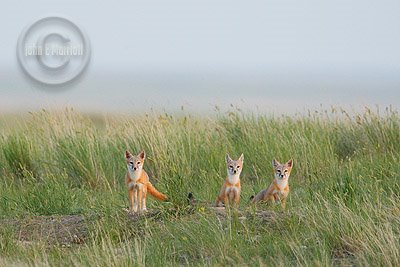 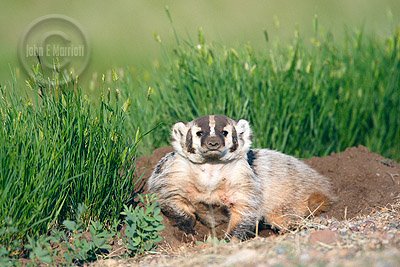 A badger near one of the swift fox dens 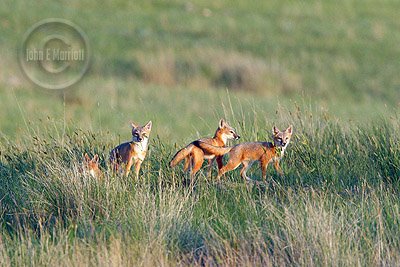 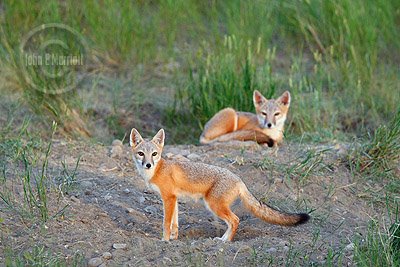 Two pups hanging out near the den entrance at sunrise

A pup stands on another pup to get a better view 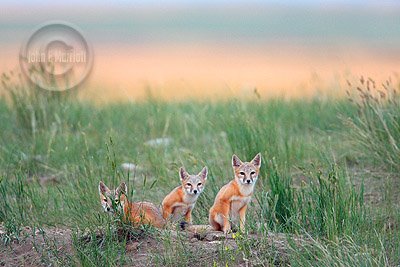 As I mentioned in my last blog entry about burrowing owls, I’m currently working on an extensive photo project with prairie wildlife. So I’m hoping that next spring and summer I’ll have more opportunities to follow up on these foxes and photograph them!

Hope you enjoyed the images!

A series of beautiful picture nicely put together

Enjoyed reading about your account of the swift foxes. We live near Eastend, SK and are not too far from where you shot most of your photos. I've gotten some photos of burrowing owls over the years when they have been nesting on our ranch.

I fell into a love for photography (as opposed to taking pictures) quite by accident when I won my DSLR camera. Unlike most photographers who have moved from film photography to Photography Colleges In Alberta.
Thanks for sharing ….