Ok, so I’ve been a tad slack in updating my blog of late…two months of extensive spring and summer shooting tends to make guys like me avoid the office like the plague. But I figured it was high time I let everyone know what I’ve been up to this summer!

I spent a large portion of June and July working with two Canadian endangered species, the burrowing owl and the swift fox. In Canada, there are less than 1000 burrowing owls and fewer than 500 swift foxes across the entire country. Both species are at the extreme northern tip of their North American range in Canada, and both populations are concentrated in the southern portions of Alberta and Saskatchewan.

And while I knew that I could go and easily get good shots of both burrowing owls and swift foxes in the US on the Great Plains, I really wanted to find Canadian animals to photograph, even if it meant spending months out on the prairie in search of these very rare and elusive creatures.

My burrowing owl travels took me from just east of Calgary, Alberta all the way to the Manitoba border, from as far north as Rosetown, Saskatchewan, south to the Montana border. In total over the course of five weeks I found 18 burrowing owl nests and saw more than 30 adult owls and more than 50 owlets!

I have to thank the local Alberta and Saskatchewan ranchers that provided me with access to their lands and gave me sightings updates on a regular basis. And I really wouldn’t have had much success at all without the willing support and help of the amazing team of burrowing owl researchers that were doing their extremely important work in the Leader, Saskatchewan area. 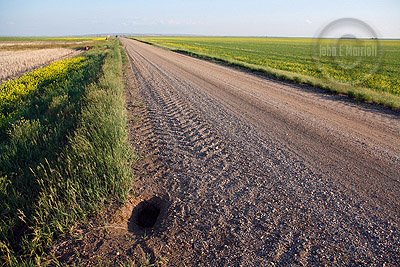 As ‘roadside’ as roadside burrows get. Fortunately, this nest was on a very lightly
used farm road. In the two days I was in this area, I didn’t see any vehicles
using this road other than the owl researchers’ truck. 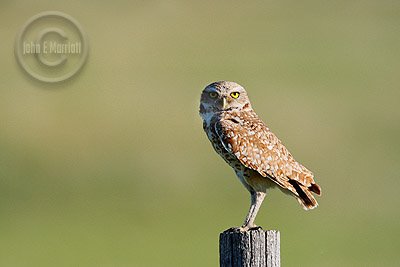 My first owl! Ok, not really, but this was by far the closest I had gotten to an owl in over five years of trying! 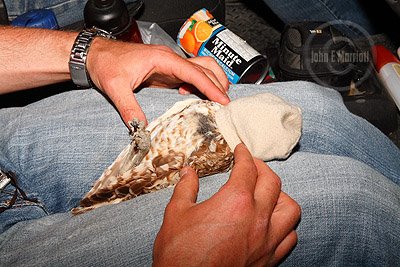 A researcher fits a tiny gps ‘backpack’ onto an adult burrowing owl. The hood over the head
of the owl keeps it completely calm while the bird is handled by the researcher.

Burrowing owl populations have been steadily declining on the Canadian Prairies for decades now, and as a result, there is extensive research being conducted in several parts of Alberta and Saskatchewan to try to get an accurate population count, to find out the cause of the decline, and to learn more about the owls’ behaviour and biology. I was fortunate enough to watch and photograph researchers as they captured owls using a variety of methods, then banded them, measured them and occasionally fitted them with tiny gps ‘backpacks’ to determine their movements and range while hunting near their nests. Researchers also set up remote cameras inside and outside of nests to watch chick and adult behaviour.

But perhaps the most interesting part of the research was when the researchers ‘peeped’ the nests…they laid flat on the ground, then inserted a long, rubber hose outfitted with night vision technology into the nest’s nooks and crannies and tried to visually determine how many eggs were in the nest, then, later, to see how many young had hatched. One of the most exciting parts was the initial ‘nosing’ about; one never knew exactly what they’d find when they inserted the hose and started poking around (one researcher screamed when her hose ran ‘head on’ into a large snake!)! 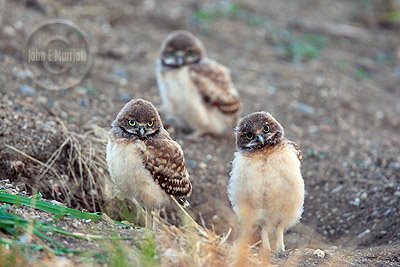 Cute and adorable. And terribly curious about the big glass eyeball making all the noise! 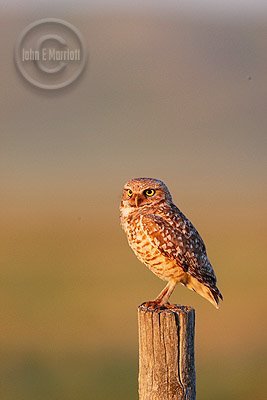 Beautiful evening light washes over an adult owl on a fencepost. 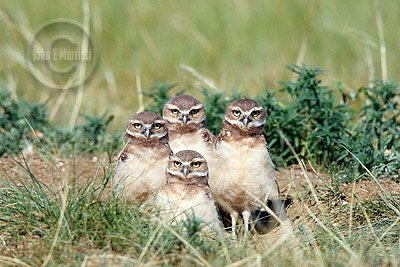 One of the nests that I set up a morning blind at. The owls weren’t dumb, they definitely
knew something was up, but for the life of them they couldn’t figure out what I was. 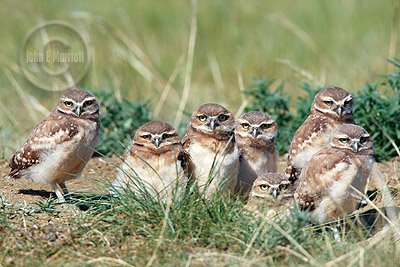 Seven owlets, the most I saw at any one nest! One of the ranchers I became friends
with told me of one summer a few years back where he had
11 nests on his property and each nest averaged 10 young!!

The burrowing owl trips were a resounding success. I plan to go back again next spring/summer, as I’m currently working on a special project related to the owls and the ongoing research on them.

Stay tuned in the next few days for a post about my swift fox encounters on the prairie. As hard as burrowing owls were to find, swift fox were even tougher!

Great post John. I really appreciate the work being done up there in Canada on the BUOWs. I have applied for a grant from the California Audubon to create some Burrowing Owl habitat here in Shasta County. The BUOW numbers in northern California have been dwindling for several years as well. I hope we can reverse this trend.

I know the Burrowing Owl Conservation Society of BC is doing a great job with their captive breeding program. I would like to find out if any of their owls are being recorded in northern California and where they might be located.

I am waiting to get some statistics from the Institute for Bird Populations on what kind of numbers they have found here.

Thanks for all your work up there!

those shots are great, good job