Wildlife photographers are like fishermen in many respects. A mutual admiration for the great outdoors? Check. A desire to proudly show off the pictures of the day’s great ‘catch’? Check. An ability to spin a tall tale when the ‘big one’ gets away? Check, check, check!

In fact, half of wildlife photographers’ time in the field is spent sharing glorious yarns with fellow wildlife photographers, and anyone else that cares to listen, about the pack of twelve wolverines they saw kill a wild boar on the outskirts of downtown Vancouver just last year. Thing was, of course, it was kinda dark and none of the pictures turned out. So the story has to stand on its own, soon embellished to fifteen wolverines and extra bonus points for a sabre-toothed tiger on the side.

[Note: no, wolverines do not travel in packs, especially packs of twelve or fifteen. No, wild boars do not live on the outskirts of Vancouver. And no, sabre-toothed tigers are not still kicking around somewhere.]

Lynx are beautiful wild cats, but they’re shy and elusive, so they’re rarely seen. I’ve only had a handful of sightings of them in the Canadian Rockies, so when I heard from friends in Jasper last week that lynx were being sighted fairly regularly in several areas, I immediately packed the car and drove up.

For three straight days I searched from dawn to dusk, but couldn’t find a thing other than some old tracks. By 9 am on the fourth morning, I was done. No lynx, no luck, so I started heading back to Jasper.

Not five minutes after ‘giving up’, I drove around a corner and was shocked to see a large lynx casually crossing the road right in front of me. A surge of adrenalin instantly snapped me out of my trance and my instincts took over. Grab cautiously! Open lens! Drive up window calmly! Errr, grab lens, open window, drive up calmly and cautiously.

As I pulled up, the lynx stood on a short bank and briefly turned around to look at me, just long enough for me to get my big lens focused and snap this shot – so close that it barely fit into the frame! 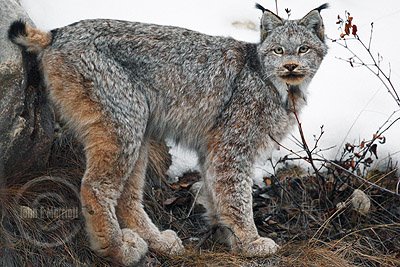 Not really sure if I’d gotten a good shot or not, I watched with dismay as the lynx then wandered off into the bush to the left. But I quickly realized there was a good chance the lynx was going to walk through a small clearing a hundred metres up the road, so I whipped the car around and stopped at the clearing.

The little clearing was so close to the road that I flipped on a smaller lens, turned off my engine, and got ready. Sure enough, before I even had time to think, the lynx popped its head out of the trees, strolled out a few feet, then stopped and stared right at me. I aimed, pressed my shutter button down…and…what the #*%@! My autofocus wasn’t on!! In the extra second it took me to flick it on, in THAT extra second, the lynx turned around and walked back into the bush.

“You have GOT to be kidding me!” was the first thought that raced through my mind, followed closely by a few choice expletives. What kind of wildlife photographer doesn’t have his autofocus turned on?? Still stewing and desperately hoping for one more opportunity, I cruised up and down that stretch of road incessantly for the next nine hours until dark, but didn’t see a thing.

So finally, in the waning evening light, I returned to the spot of the ‘tragedy’. Then, as if to torture myself for eternity, I pulled out that same lens, aimed at that same spot, and took this picture: 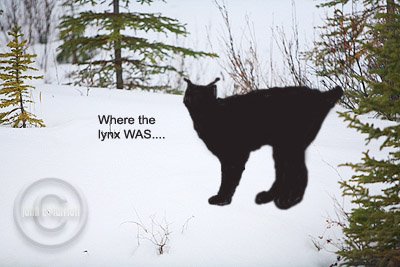 The one that got away, indeed….

3 Comments on “Lynx Photography – The One That Got Away”

Great story. And the shot you did get is brilliant!

A friend of mine had a story about going camping in Keji when she was very young and bringing back a “kitty” to the campsite to take home. A kitty with tufty ears that her parents wouldn’t let her keep.