Mud, rain, snow, fog, and sleet faced off for a conclusive three days this week against me and my battered Subaru Forester for a final duel to the dea…ok, for a final duel to determine an ultimate winner in this three week saga in the Great Canadian North.

So the question is, was the final battle all worth it? Was the five hour drive to and from Whitehorse on Wednesday and Saturday, sandwiched over a ridiculous 2,320 more kilometres on the evil Dempster with another 37 kilometres on foot thrown in for good measure, worth it? Did the bears dance, the caribou waltz, and the woolly mammoths rumble across the tundra?

Let me answer the question with this: 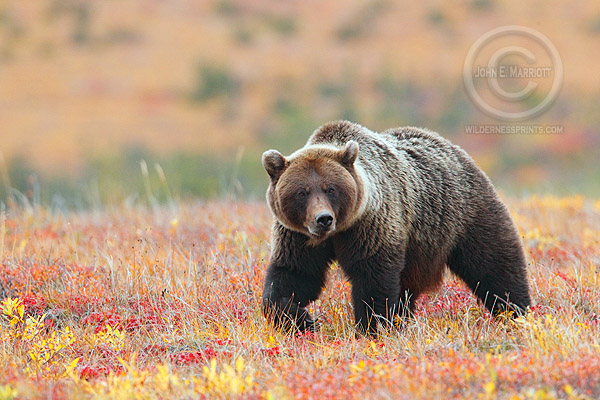 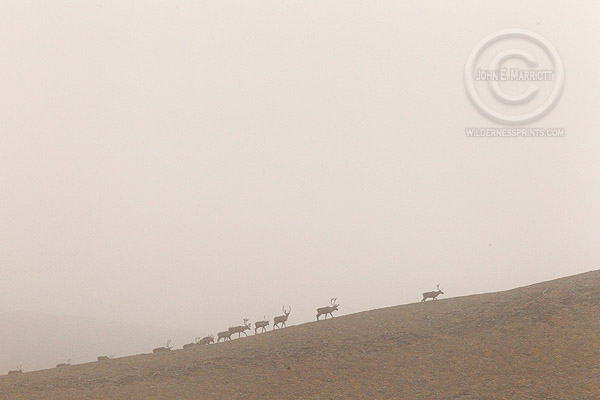 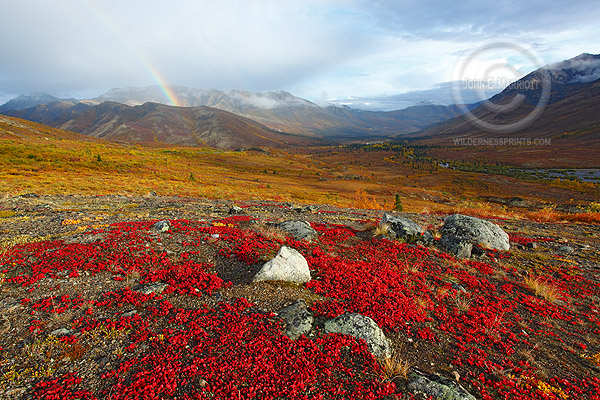 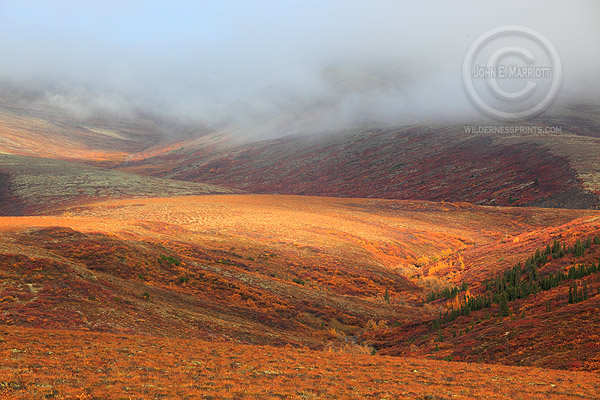 Fall colours on the tundra in the Richardson Mountains, Northwest Territories

A grizzly bear chases a herd of caribou across the tundra

In just three short days, I saw the most amazing thing: the sun. That’s right, that big yellow thing in the sky, that long-forgotten alien object that once graced our summer skies frequently, decided to make an appearance on Friday afternoon and stayed through all of Saturday, turning a mundane final few days into a show-stopper that had me scrambling trying to take advantage of every last tiny drop of light from dawn to dusk.

And while the caribou were scarce, I did make a few distant sightings, including a rare sequence of shots of a grizzly chasing a small herd across the tundra.

I even saw my old nemesis, the car-jumping rascal griz that had scared me half to death a week earlier by pouncing on the hood of my car. This time around she was out to thwart my best attempts at landscape photography — each time the sun came out and I went off to do some scenics, she would appear like a ghost out of the fog and force me to photograph her in fall colours in sunlight. I know, I know, terrible stuff to have a grizzly bear get in the way of scenic photos, but such is life.

She even got a name, finally. No, not Rascal or Pouncer, but rather Stripe, for her prominent dark stripe running down her back between her beautiful blonde shoulders. And for pictures of her, you’ll need to wait for the full Dempster update in a week or two when I actually have time to look at the 23 folders of photos now residing on my computer, 10,380 photos in total.

So all in all, even though I once again battled rain, mud, and even snow, I came out a winner. My car did not break down. My tires held up. Even my spirits were buoyed, particularly when I witnessed a squirrel race across the road in front of me with a mushroom twice its size in its mouth early one morning! It was enough to make me gasp in amazement, then laugh uproariously out loud!

So what was the total trip yield over the three weeks? How many wolves, lynx and wolverine? How many nights of dancing northern lights? And how many kilometres did my silver Subaru choke back under her tires? For that, you’ll also need to wait for the full update in a week or two.

Until then, I’m off to Bugaboo Lodge in the Purcell Mountains to do a little heli-hiking!

Happy shooting, and thanks to all of you for the many, many comments on Facebook, Twitter, and here on my blog, along with all of the emails. It was fantastic to read all of the responses on my trip!

9 Comments on “And the ‘Dempster Duel’ Winner is…”

Amazing! Can't wait to hear and see the rest of the story.

Hi John,
I've enjoyed keeping up with all your trials and tribulations. Have fun editing all those files.
Carl.

Wow! Love all your images! The colors on the landscape are fantastic!

Great shots, John. Love the one of the grizzly.

STUNNING, Johnny! Can't wait to see the rest of your pics! I booked my trip to Banff last weekend. I've been drooling at the thought of seeing the Canadian Rockies again! We plan to spend one day at the Festival…and the other taking in the sites. Do you have any suggestions for a jaw-dropping day trip?

Amazing review and photos… waiting for the full one!