The sounds of baying hounds could clearly be heard over our cross-country ski instructor’s voice. I had come to Nipika Lodge, a beautiful eco-lodge tucked into a wild corner of the BC Rockies, to ski, to enjoy a little peace and quiet, and to watch wildlife. I had not come to Nipika to hear the final few hours of a cougar’s life unfold. 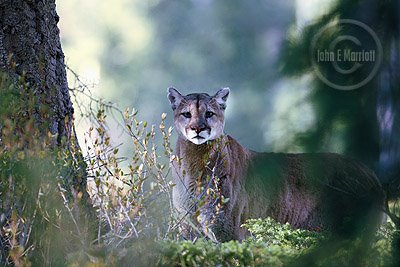 ‘Doug’, a male cougar that frequents the Banff area

Cougar conservation in British Columbia and Alberta has been on my mind ever since a horrifying encounter I had on Alberta’s Highway 22 near Bragg Creek in November 2008. Driving in heavy traffic in the dark in a snowstorm, I saw two cars in the opposite lane suddenly swerve as if they were trying to avoid something. As I drove by the spot, I glimpsed what appeared to be an animal lying on one side of the road. Fearing the worst, I turned around quickly and was shocked to see a cougar lying on the edge of the highway, laying on all fours with its head up looking around at my headlights. As I got closer, I realized the cougar had been hit by a car and was paralyzed from the neck down.

What followed was one of the saddest chapters in all of my experiences with wild animals. It was the first cougar I have ever watched die; and, hopefully, the last.

Two months later, in January 2009, while driving along the Bow Valley Parkway in Banff National Park early one morning, I came across another dead cougar. It appeared to have been hit by a vehicle during the night and left to die by the side of the road. That same week, newspapers in the Banff and Canmore area reported the death of a large male cougar on the railway tracks near Canmore. 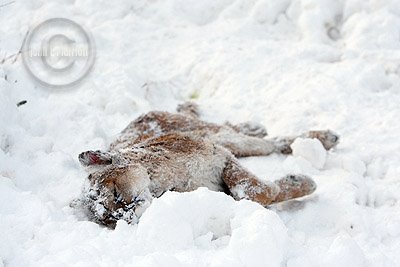 Within three months, I had read about or witnessed three human-caused cougar deaths, all within an hour of my home in Canmore. These incidents help highlight the problems facing large predators in the Canadian mountain parks and the surrounding lands. When you add this incidental human-caused mortality to natural-caused deaths, then compound it with the archaic hunting and trapping regulations concerning cougars, wolves, lynx, and other predators in British Columbia and Alberta, you begin to see why so many people are concerned with our tenuous large predator populations here in the Canadian Rockies.

When I heard the hounds stirring up a ruckus near Nipika last Monday (February 10th), and learned that hunters were running a cougar with their dogs, my blood began to boil. I stayed in touch with the story and emailed the owner of Nipika, Lyle Wilson, on Tuesday evening after returning home. As much as I didn’t want to know, I had to find out if a cougar had been shot and killed like everyone at the lodge had suspected.

Lyle’s email back to me that night confirmed the tragedy:

“Sunday afternoon while operating the Nipika Resort day lodge we started getting reports off the [cross-country ski] trails that people were hearing the bailing howls of a pack of hounds within the area of the trails. This noise went on for a number of hours then stopped in the late afternoon. The following day, Monday, the howling started again early in the day, but from the east side of the Nipika woodlot, and the Cross River Canyon Receation Site. This is a recreation area specifically set up for non-motorized activities. Discharging of firearms is prohibited throughout the site! The howling went on, moving in a Southerly direction for most of the day, until about 2 PM when the loud report of two shots from a high powered rifle split the air. We knew right away that a cougar was dead. The way this is done is that the hunters will simply drive the forestry roads until their dogs tell them by barking that a cougar has recently crossed the road. They let the hounds loose, sometimes one will have a GPS collar attached, and the dogs tear after the cougar scent. The cougar is run to exhaustion, when it, in desperation, climbs a tree to what it assumes is safety. The great white “hunters” then leisurely walk to where the dogs are going crazy at the base of the tree the cat is trapped in, line up the best shot, and shoot the cougar right out of the tree. And they call this sport. I followed the tracks of the hunters 4 wheel drive vehicle right through our non-motorized rec site, and along a narrow road until they were just a few hundred meters from the treed cat. They then walked up the hill to their dogs and shot this magnificent cat dead with 2 shots. It was easy to locate the scene as there was a pronounced blood trail all the way from the tree back to the truck … the route was littered with empty pop cans, chocolate wrappers, etc, etc that were discarded as they passed by, pretty easy to follow.”

Lyle summed up his feelings by writing:

“It is simply insulting for people to call this type of murder a sport or to consider these individuals as ‘outdoorsmen’. They have about as much connection to the natural environment as I have a connection to the planet Mars. When will we learn tolerance?”

And Lyle is right. While it’s legal, and while these hunters were well within their rights, it still does not mean that hunting cougars (or bears or other predators) with dogs is a god-given right. If everything our forefathers did was still legal, then we’d all be out shooting buffalo off of train decks, leaving the carcasses to rot in the summer sun.

Perhaps more importantly, maybe it’s time we re-examined the morality of this type of hunting. What sport is there in driving up and down a logging road til your hounds sniff a cougar out and then run it down, all the while you tail the proceedings in your truck, until it’s time to go in and take your trophy.

And that’s exactly what predator hunting is: trophy hunting. There is no meat taken or eaten, in fact, the carcass is always left behind. It’s just the head/skull and hide that the hunters are after, and to me, this is inherently wrong.

The British Columbia Fish & Wildlife Branch trumpets the cougar on their website “as an integral part of the wildlife of British Columbia” for which “careful management must be maintained.” Yet the website goes on to say that one of the reasons cougars are important is “as a legitimate form of outdoor recreation for the hunter and non-hunter alike.” A legitimate form of outdoor recreation for the hunter? Driving around in a vehicle while their dogs terrify and chase down a cougar to the point of exhaustion? If this is hunting and outdoor recreation, then we truly do need to re-examine our wilderness morals and ethics as a society.

Check out these staggering facts: in British Columbia, a hunter with a regular hunting license ($32) can spend an additional $110 (!!) each year in order to go out and kill 2 cougars, 1 grizzly and 3 wolves each year. How much would those animals be worth alive to an ecotourism operation like Lyle’s at Nipika, where a single night of full cabins brings in more than $4000 in direct tourism revenues.

Worse yet, not only can cougars be hunted legally from September to February each year, but in the ‘off-season’, anyone with cougar hounds can go out and chase cougars ‘for sport’ and ‘for fun’ in a year-round ‘Pursuit Only’ season.

So how do we go about changing this archaic way of thinking? You can start by firing a quick email to the following contacts in the BC government to express your opinions on the fact BC still allows cougar hunting with dogs and express your support for ecotourism operations like Nipika Lodge which promote wildlife viewing in place of trophy hunting. Even one email helps!! Maybe just simply ask them why BC and Alberta still allow cougar hunting with dogs, to bring it to their attention.

Fish and Wildlife Branch, BC Ministry of the Environment
E-mail: www.envmail@gov.bc.ca

Thank you. For more conservation news and other issues that concern me, please visit my Canadian Rockies Conservation Issues page.

3 Comments on “Cougar Conservation in British Columbia and Alberta”

John : This is absolutely shocking. Trophy hunting and that too wild cats as target is such a shame. Thanks for narrating this unfortunate episode to the world.

That congar in tha image is so beautiful and its ridiculous that its been killed thanks to human greed.

Amazingly sad story! On the Kootenay Plains ecological reserve in Alberta, trapping is allowed. This year the trapper already has five wolves, one cougar, and one lynx. I am sure the wolves are Banff Park wolves that get sucked out of the park by the bait (elk, deer and cows).

I will fire off letters to those in power. Thanks for the reminder about the ‘sport’ of hunting cougars with dogs.

Thank-you for sharing, John. Although extremely difficult to read without shedding many tears, I did read on till the end. I figure that I must learn something from this, and that I shall.